Just added to your cart

Get your EMP Shield today with a discount. Click the link below for more information. Get one for your home too to protect against lightning strikes.

What in the world is Mullein?

What in the world is mullein?

Mullein is a plant that has long fuzzy leaves that form a low lying basal rosette. The Latin name for this Common Mullein is Verbascum Thapsus. It's a biennial plant that stays rather short the first year. The second year it grows a large stalk that can grow up to 10 feet high. The stalk grows small yellow flowers on it. It has also been been called Aaron's rod because the of the small yellow flowers on it; which refers to Numbers 17:8 which says: And it came to pass, that on the morrow Moses went into the tabernacle of witness; and, behold, the rod of Aaron for the house of Levi was budded, and brought forth buds, and bloomed blossoms, and yielded almonds.

I bought a mullein start three years ago to see what I could do with it. It sat in the pot for a while because I didn't know enough about it and wasn't sure where to plant it. I finally just picked a spot on the side of my deck, dug a hole and planted it then forgot all about it. I wasn't sure if it would grow but, sure enough, a few months later I happened to catch a glimpse of it out of the corner of my eye and it had grown quite a bit but I still didn't know what to do with it. Winter came and the plant died back and I felt guilty for not taking the time to figure out what to do with it. Then last year it grew back, with a tall stalk full of little yellow flowers that was probably 8-9 feet tall. It even had smaller stalks growing out the sides of the main one. I finally made some time to learn about it but the yellow flowers had mostly fallen off the stalk by then so I harvested some leaves and left the rest of it. When the stalk dried up I cut if off the plant and cut the side shoot stalks off and harvested the seeds so I can plant it all over my yard. I even found two wild mullein plants growing in my yard so I did the same with those. 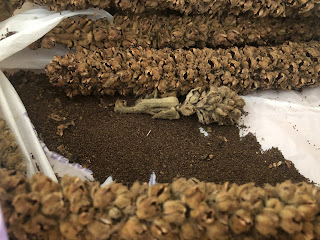 How can it be used?
Every part of the plant can be used, leaves, flowers and roots. Some of you might remember having ear aches when you were little and having oil put into your ears for the pain. That oil was made from the little yellow flowers of the mullein plant. These days people usually go to the doctor and end up coming home with an antibiotic. Sadly, people have forgotten about the things that were used to treat things like earaches and instead go for something created in a lab. But there's so much in nature that we can use without going to a doctor and coming home with some kind of prescription.

Some things Mullein has been known for

Mullein can be used for asthma, coughs, lung-related ailments, diarrhea, inflammatory issues, earaches, bruises, gout, hemorrhoids, burns. It can be applied topically, ingested and some people even smoke it.

Tea can be made from the mullein leaves. All you do is simmer the leaves in boiling water then strain. The tea has been known to help relieve sore throats, coughs, cold, COPD, bronchitis, hoarseness, emphysema, whooping cough, joint pain and diarrhea. The tea can also be used to calm bursitis, which is a fluid-filled sac that cushions bones, muscles and tendons near your joints. Just soak a clean cloth or an ace bandage in the warm tea and apply to the affected area.

For ear infections you can use mullein ear drops. Not only can it be used for humans, but also for animals. The oil can also be used internally for infections in the kidneys, colon and urinary tract, including vaginal yeast infections.

The root can be used to treat croup.

Fresh mullein leaves boiled in milk and drank daily was used as an Irish folk remedy for tuberculosis.

It is not recommended to use mullein if your are pregnant or nursing simply because it has not been tested for safety and efficacy.

Research reveals no reports of serious toxicities with mullein use however, there are some instances of skin or throat irritation from the leaves due to the fuzziness. I am not a doctor and am not selling medication. I am only selling seeds to grow a plant that has many uses. Be sure to check with your doctor before using any plant as medication. How you choose to use this amazing plant is up to you. Please do your own research on it.